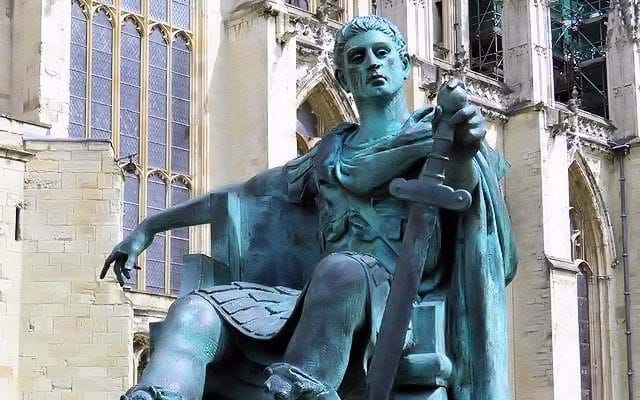 The Roman Emperor Constantine (c. 280 - 337 AD) was one of the most influential people in ancient history. By adopting Christianity as the religion of the vast Roman Empire, he elevated a once illegal religious group to the law of his empire. At the Council of Nicea, Constantine settled Christian doctrine for the ages. Then by establishing a capital at Byzantium, later Constantinople, he set into motion a series of events that would break the empire, split the Christian church and impact European history for a thousand years.

Constantine was born at Naissus on February 27, 273 AD. From an early age Constantine embarked on his successful military career, which took him all over the Roman Empire, from Palestine and Asia Minor to Britain, Spain, and Gaul. Constantine became a General and while crossing the Alps with his army, he had a vision (or dream) of a cross of light shining in front of the sun and the words: In this sign conquer. Shortly after that vision, Constantine defeated his rival, Maxentius, captured Rome, and was acclaimed the next emperor.

History often turns upon certain pivotal events or individuals. Early Christianity faced two significant perils: one external—violent persecution by the Roman government, and one internal—the Arian heresy, which denied Christ's divinity. In a providential twist of events, God raised up an emperor who would play a key role in confronting each of these perils, becoming one of Christianity's greatest defenders. Constantine's rule started an avalanche of events that altered the course of Christianity.

Constantine was the first Roman emperor to convert to Christianity, and he played an influential role in the proclamation of the Edict of Milan in 313 AD, which declared religious tolerance for Christianity in the Roman empire. He called the First Council of Nicaea in 325 AD, at which the Nicene Creed was adopted by all Christians.

Was Constantine really a Christian?

There are so many theories over what actually happened during the reign of Emperor Constantine. Some people prefer to think of Constantine as an evil person who was thoroughly pagan, who sought only to control Christianity and made himself the Pope of the Roman Catholic church. While scholars and amateurs alike have long since speculated over such things none of this really matters for our purpose. What matters, is the results of the events that Constantine put into place.

There are three events during the reign of Constantine that affected Christianity to this day:

The results of the Council of Nicaea are well documented. The heresy of Arianism was quashed and the Doctrine of the Trinity was entrenched throughout all of Christianity.

The purpose of this articles about Constantine has been to show the path of manuscripts from the Apostles to the Textus Receptus. After Constantine's death, the Roman Empire split into two. The Byzantine Empire became the center of manuscripts in the Greek tradition and kept the Koine-Greek language alive until 1453. In the meantime, the western Roman Empire under Rome and the Roman Catholic Church continued to promote Jerome's Latin Vulgate