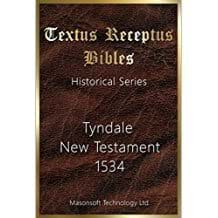 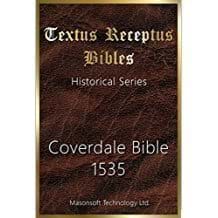 The Coverdale Bible, compiled by Myles Coverdale and published in 1535, was the first complete Modern English translation of the Bible with the Old and New Testament translated from the original Hebrew and Greek. The later editions (folio and quarto) published in 1539 were the first complete Bibles printed in England. The 1539 Folio edition carried the royal license and was, therefore, the first officially approved Bible translation in English. 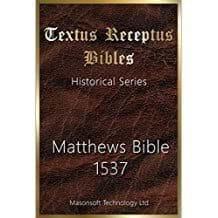 The Matthew Bible, also known as Matthew's Version, was first published in 1537 by John Rogers, under the pseudonym "Thomas Matthew". It combined the New Testament of William Tyndale, and as much of the Old Testament as he had been able to translate before being captured and put to death, with the translations of Myles Coverdale as the balance of the Old Testament. It is, therefore, a vital link in the main sequence of English Bible translations. 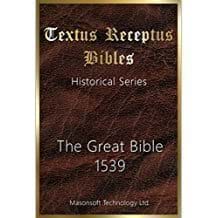 The Great Bible of 1539 was the first authorized edition of the Bible in English. Authorized by King Henry VIII of England to be read aloud in the church services of the Church of England. The Great Bible was prepared by Myles Coverdale, working under commission of Thomas, Lord Cromwell, Secretary to Henry VIII and Vicar General. In 1538, Cromwell directed the clergy to provide "one book of the bible of the largest volume in English." 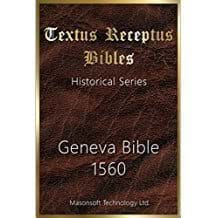 The Geneva Bible is one of the most historically significant translations of the Bible into English, preceding the King James translation by 51 years. It was the primary Bible of 16th century Protestantism and was the Bible used by William Shakespeare, Oliver Cromwell, John Knox, John Donne, and John Bunyan. Because the language of the Geneva Bible was more forceful and vigorous, most readers strongly preferred this version. 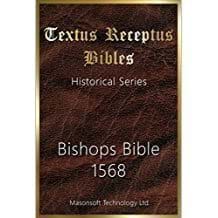 The Bishops' Bible was produced under the authority of the established Church of England in 1568. The Calvinism of the Geneva Bible offended the Church of England, to which almost all of its bishops subscribed. They associated Calvinism with Presbyterianism, which sought to replace the government of the church by bishops with government by lay elders. 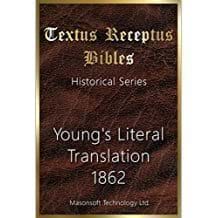 Young's Literal Translation of the Bible was made by Robert Young, compiler of Young's Analytical Concordance to the Bible and Concise Critical Comments on the New Testament. Young used the Textus Receptus and the Majority Text as the basis for his translation. He wrote in the preface to the first edition, "It has been no part of the Translator's plan to attempt to form a New Hebrew or Greek Text--he has therefore somewhat rigidly adhered to the received ones." 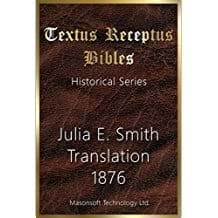 The Julia Evelina Smith Parker Translation is considered the first complete translation of the Bible into English by a woman. The Bible was titled The Holy Bible: Containing the Old and New Testaments; Translated Literally from the Original Tongues, and was published in 1876. In 1876, at 84 years of age some 21 years after completing her work, she finally sought publication. Only 1,000 copies of this Bible were ever printed.