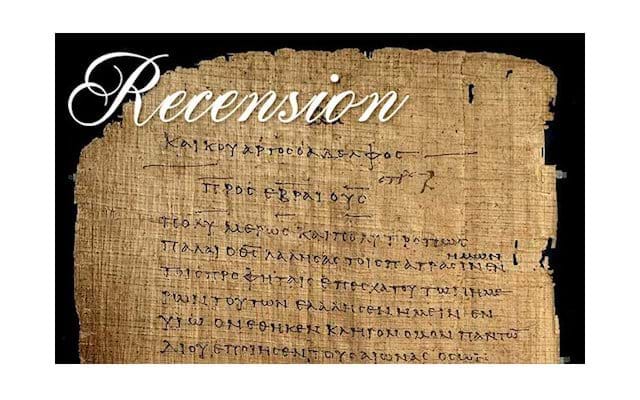 The Recension of The Biblical Texts

A recension of any text is a review or an analysis of a text. This results in a different text and it is usually created by a different author. In biblical textual criticism, the noun "recension" is used to refer to a family of copied manuscripts sharing similar traits which were created by reviewing another earlier text.

At some stage in the first few centuries, it is now obvious there were several recensions of the original New Testament text. History records that in 382 a man named Jerome, with a commission from Pope Damasus, created a recension of the Bible in Latin for the Western Roman Empire. This recension resulted in a paraphrased and harmonized text which adopts alterations or additions from sources unconnected to the books that became canonical. Manuscripts that have these characteristics are known as the Western recension and are generally 10% longer than other text types.

This is where the problem starts because until the 19th century there was no other known major recension. There are no historical records to even suggest another recension. But in the late 19th century Westcott and Hort claimed that the Byzantine text-type (the basis for Textus Receptus) was created with a recension of the Alexandrian text-type. The Alexandrian text came from two codex called Vaticanus and Sinaiticus. Neither of these codex has any provenance before the 15th century.

Westcott and Hort put forward a theory that an early church father called Lucian created the recension in Antioch which was sanctioned by the Christian church in Constantinople. No historical records exist to support this theory but it was enough to fool many of the biblical text scholars of the day and this has since created a whole industry for modern textual-criticism.

So, was the Byzantine text-type created with a recension of the Alexandrian. There are many problems with this theory:

7) Codex Vaticanus and Sinaiticus have never been scientifically date-tested. Their current dating is speculative and relies only on palaeographic estimates, so nobody really knows if they are old or not.