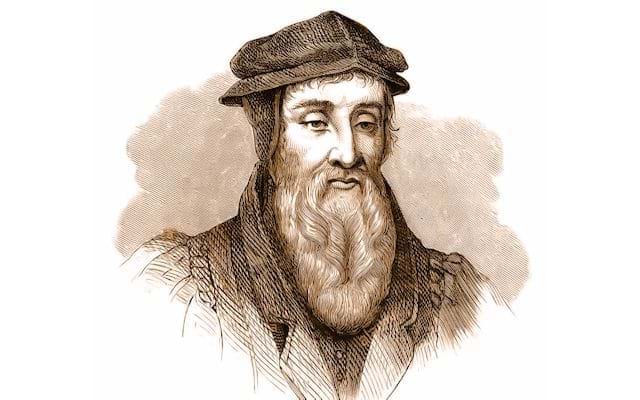 Robert Estienne (known as Stephanus) (1503-1559) edited and printed four editions of the Textus Receptus from 1546 to 1551. His third edition of 1550 was the first to have a critical apparatus, with references to the Complutensian Polyglot and fifteen additional Greek manuscripts. The fourth edition of 1551 had the same Greek text as the third, but is especially noteworthy for its division of the NT books into chapters and verses, a system still in use today.

Robert was born in Paris, the second son of the famous humanist printer Henri Estienne (the Elder). He became acquainted early on with ancient languages. After Henri's death in 1520, the printing establishment was maintained by his former partner Simon de Colines who also married Robert's mother, the widow Estienne. In 1526 Robert assumed control of his father's printing shop while de Colines established his own firm nearby.

In 1539 Robert Estienne received the distinguishing title of "Printer in Greek to the king". But the official recognition and the crown's approval to his undertaking could not save him from the censure and ceaseless opposition of the divines. In 1550, to escape the violence of his persecutors, he emigrated to Geneva, where he set up his printing house.

With his title of "royal typographer" Estienne made the Paris establishment famous by his numerous editions of grammatical works and other school books. Many of these, especially the Greek editions (which were printed with typefaces made by Claude Garamond), were famous for their typographical elegance. Robert also printed numerous editions of Latin classics, of which perhaps the folio Virgil of 1532 is the most noteworthy. He printed a large quantity of Latin grammars and other educational works, many of which were written by Maturin Cordier, his friend, and co-worker in the cause of humanism.

Of more importance are his four editions of the Greek New Testament, 1546, 1549, 1550, and 1551, the last in Geneva. The first two are among the neatest Greek texts known, called O mirificam. The third, a splendid masterpiece of typographical skill, is known as the Editio Regia. The 1551 edition contains the Latin translation of Erasmus and the Vulgate, is not nearly as fine as the other three, and is exceedingly rare. It was in this edition that the division of the New Testament into verses was for the first time introduced.

On his arrival at Geneva, he published a defense against the attacks of the Sorbonne. He issued the French Bible in 1553 and many of John Calvin's writings, including the finest edition of the Institutio in 1553. His fine edition of the Latin Bible with glosses (1556) contained the translation of the Old Testament by Santes Pagninus and the first edition of Theodore Beza's Latin edition of the New Testament. He died in Geneva.