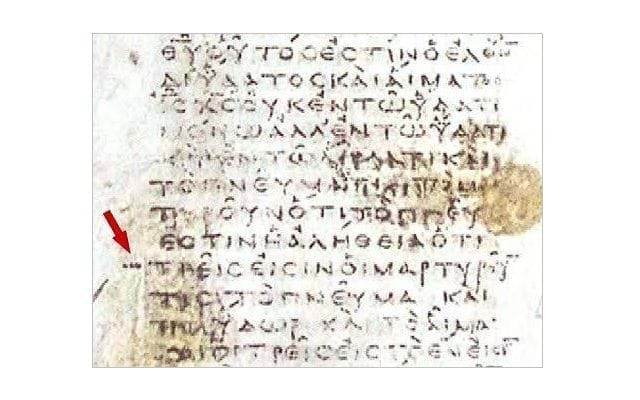 The Originality of Text-Critical Symbols in Codex Vaticanus

The Codex Vaticanus contains 850 textual markers which in 1995 were discovered to be markers for textual variants. The textual markers look like umlauts (double dots). The Vatican itself has identified many of these dots as being part of the original document. To understand the importance of this discovery you must understand that it is the variants in the verses of text that distinguish the Byzantine text from the Alexandrian text.

For the past 22 years, scholars have argued over the dots, with some trying to claim the marker must have been added at a later date. The reason for the skepticism is self-evident when you consider the implications. Many of these dots point to variants that only exist in Byzantine texts (the text behind the Textus Receptus). There are also dots next to the Comma in 1 John 5:7-8. This means the Byzantine text would have predated the Codex Vaticanus.

Many critical-text scholars have argued against these textual markers for years but have failed to find a way to refute the evidence that points to the Byzantine texts existance before the Alexandrian text.

The original paper on the discovery of these text-critical marks can be read here:

Are Text-Critical Markers a Phenomenon Only Found in Codex Vaticanus?

Nobody had previously asked the question of whether textual variants had been marked in early manuscripts until they were found in Codex Vaticanus. Nobody had bothered to look or understand. Once people started looking the results were astounding, to say the least.

It was soon found that the fourth-century hexaplaric Codex Colberto-Sarravianus (LXX G) contained dot markers in its margins that correspond closely to the shape and location of dot markers in Vaticanus. The markers of Codex Colberto-Sarravianus are similar enough to Vaticanus that one has to wonder if they may have come from the same scriptorium. Although the Septuagint is the Greek version of the Hebrew Bible (Old Testament) it's production dates from the same time period.

This pattern follows the established use by Origen in the midst of LXX G body text, proving that both were part of the original production of LXX G. There is no dispute that these dot marker locations where the Hebrew Scriptures do not include the adjacent text. Origen describes the method he used in his famous letter to Africanus (c. A.D. 240), "I marked, for the sake of distinction, with the sign the Greeks call an [obelus] … those passages in our copies which are not found in the Hebrew." The same system can be found in Aristarchus of Samothrace’s (217–145 B.C.) system of marking lines in Homer’s works he considered spurious. No matter who originated them, the use of distigmai (umlauts) to mark Greek textual variants was well established in Alexandria, the most widely accepted provenance of Codex Vaticanus.

It is highly unlikely that critical text scholars will ever admit that Byzantine texts predate the critical text, there is simply too much at stake for them. There would have to be a willingness to say their methods are flawed.

The fact remains that these text-critical marks are in Codex Vaticanus and are verified by the same markings in other manuscripts. None of the scholars charged with researching this are trying to refute that the marks point to textual variants, but there are so many ways this information can be suppressed. So don't expect a definitive answer, anytime soon.

When I first started looking into this a number of years ago, I asked Prof. Bert Erhman on his Facebook page what was the status of these dot markings in Vaticanus. Like most CT people he was very non-committal and said, scholars were still discussing the matter. What this meant to me then, and now, is they have not found a way to refute the implications of these textual variant markings.

Instead of refuting the TR and MT texts, the NA/UBS has slowly started to give recognition to these texts. The latest edition of Nestle-Aland (NA28) which uses the INTF text from the University of Münster, Germany, has updated its apparatus to show some of these textual variants. During the launch of NA28, they admitted there had in the past, been too much bias against the Textus Receptus.

The Vaticanus manuscript containing 1 John 5:7 demonstrates that a significant textual variant was known for 1 John 5:7 in the 4th century. In 1995 Philip B. Payne discovered "umlauts" (double dots) in the margins of various places in Codex Vaticanus. He and many scholars agree that these umlauts indicate lines where a textual variant was known to the scribe. You can read his work, The Originality of Text-Critical Symbols in Codex Vaticanus here: Vaticanus Text Critical Symbols

Interestingly, an umlaut appears next to the phrase "τρεις εισιν οι μαρτυρουντες" in Vaticanus. Payne briefly discusses and seemingly dismisses the significance of the umlaut in 1 John 5:7 (p. 112, footnote 34), but without a doubt, the umlaut is there. The graphic displayed is a scanned image of 1 John 5:6-8 in Vaticanus and the red arrow points to the double dots.

The screen capture of the transcription of the picture below is from the official digitized Nestle-Aland on the University of Munster Institute website.

There is only one known variant in 1 John 5:7 and that is the Johannine Comma which is now contained in the Textus Receptus. This means the Comma existed before the Codex Vaticanus was written.