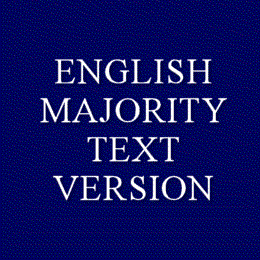 Welcome to the third edition of The English Majority Text Version (EMTV) of the Holy Bible. This latest edition has Greek explanatory notes throughout the Bible, to aid the reader in understanding the meanings in some select places of the original Koine Greek. Also, the third edition finds itself closer to the Robinson/Pierpoint printed edition of the Byzantine majority text, rather than the Hodges/Farstad text, which the EMTV was translated from. You will notice these differences in John 7:53-8:11, as well as the entire book of Revelation.

The English Majority Text Version draws from the work of both Dr.’s Hodges and Farstad, and their text, “The Greek New Testament According to the Majority Text,” as well as from Dr. Wilbur Pickering, ThM. PhD., and the EMTV has incorporated his hard work in the field of producing evidence of just what does constitute a majority reading, and, as a result of his work, and the work of others, John 7:53-8:11, and the book of Revelation reflect these variant readings. This is one of the great things about having a Bible that is translated from the majority of the trustworthy Byzantine manuscripts that are in existence—the much greater probability of accuracy.

On the other side of the fence, most modern Bibles are translated from a few scant manuscripts (literally), and more often than not they do not even agree with each other. Not so with a Bible that is translated out of the majority! The experts in linguistics who have put these readings together, and diligently compared the manuscripts, had hundreds and hundreds of manuscripts to compare. It is my prayer that this work will bring honor to our Lord and Savior Jesus Christ, and to our God and Father; because all of this, all that we do, we do to know Him better, and to better understand His word, which He has given to mankind. “Every word of God is pure; He is a shield to those who put their trust in Him. Do not add to His words, Lest He rebuke you, and you be found a liar. (Prove 30:5,6). Peace of Christ to you all. In His service, Paul W Esposito Stauros Ministries