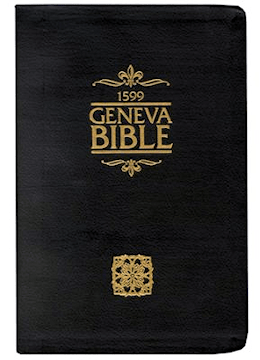 The Geneva Bible is one of the most influential and historically significant translations of the Bible into English, preceding the King James translation by 51 years. It was the primary Bible of 16th century Protestantism and was the Bible used by William Shakespeare, Oliver Cromwell, John Knox, John Donne, and John Bunyan. The language of the Geneva Bible was more forceful and vigorous and because of this, most readers strongly preferred this version at the time.

The Geneva Bible was produced by a group of English scholars who, fleeing from the reign of Queen Mary, had found refuge in Switzerland. During the reign of Queen Mary, no Bibles were printed in England, the English Bible was no longer used in churches and English Bibles already in churches were removed and burned. Mary was determined to return Britain to Roman Catholicism.

The first English Protestant to die during Mary's turbulent reign was John Rogers in 1555, who had been the editor of the Matthews Bible. At this time, hundreds of Protestants left England and headed for Geneva, a city which under the leadership of Calvin, had become the intellectual and spiritual capital of European Protestants.

One of these exiles was William Whittingham, a fellow of Christ Church at Oxford University, who had been a diplomat, a courtier, was much traveled and skilled in many languages including Greek and Hebrew. He eventually succeeded John Knox as the minister of the English congregation in Geneva. Whittingham went on to publish the 1560 Geneva Bible.

This version is significant because, it came with a variety of scriptural study guides and aids, which included verse citations that allow the reader to cross-reference one verse with numerous relevant verses in the rest of the Bible, introductions to each book of the Bible that acted to summarize all of the material that each book would cover, maps, tables, woodcut illustrations, indices, as well as other included features, all of which would eventually lead to the reputation of the Geneva Bible as history's very first study Bible.